Jimmy Hood started his career as a mining engineer 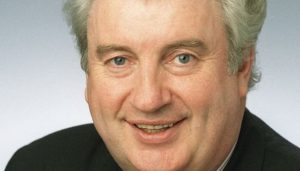 after he graduated from the Motherwell Technical College and the University of Nottingham. Working for the NCB, Jimmy became a strong voice for the mining workers, especially when he joined the National Union of Mineworkers in the 1960s, and in 1973, he became a trade union official. When Britain was hit by the Miners’ Strike in 1984 and 1985, he was responsible for leading the Nottinghamshire miners. Meanwhile a father of two, a son and a daughter, he had already great outlooks back then to advocate for the good of the people.

His parliamentary career started at the end of the 1970s when he first was elected councilor in the Newark and Sherwood District where he remained until he joined the Westminster Parliament, as a Labor Party representative, of course. When Judith Hart, a Labour Party MP retired, Jimmy replaced her in the Parliament in the 1987 elections in the House of Commons. Still, his seat in the Parliament for Clydesdale was discontinued when the authorities changed the borders of the voting districts in the eve of the 2005 elections. He was again elected as MP, this time he ran for the Lanark and Hamilton East.

As an MP, he supported the lefties and was against the poll tax policy. He also took a more liberal stand in 1998 when he advocated for the abolition of Party whips, i.e. enforcers of a Party’s policies by influencing their MPs to vote according to the views of their Party. Hood was strictly against it as he called it career murder, given that the whips did not leave enough space to MPs to make decisions independently or according to their own beliefs.

Even if Hood made himself known as a left-wing Politician, he showed to be a great supporter of Prime Minister Blair and his policy. Hood is not a fan of wars or interference as he was also strongly opposed to the Iraq invasion in 2003, as well as to the Gulf War which was led against Iraq under the USA to stop it from its invasion of Kuwait in the early 1990s. During his political and parliamentary career, he was a member of many Committees, like the Liaison Committee, etc.

Scotsman Hood was and is a great supporter of the Union Act which unites England and Scotland, and he reaffirmed it during the 2014 Scottish Independence hassle whereby he publicly and unconditionally opposed the independence of Scotland. He fiercely stood up to the Scottish National Party and said that even a better economic situation of Scotland would not be worth leaving and dissolving the Union. Maybe that is what cost him his parliamentary seat in the following year in the 2015 elections when he lost to the Scottish National Party member Crawley.
This was not a surprise as the SNP gained in popularity with the independence campaign. Still, despite the initial euphoria, it seemed to have faded away when it came to the actual referendum as the majority of votes, over 50%, accounted for staying in the Union as a part of Great Britain. The SNP did not meet the expectations of the Scottish people at that moment, so the number of independence supporters declined.

The Scandal on Expenses of Parliament Members

No politician or MP was spared from the rage of the public in 2009 when it came out how much public money they spend on their private matters. Hood, as an MP at that time, was also targeted here and then, especially regarding his second home expenses which he used to be closer to Westminster not having to travel all the way from Lanarkshire. He was accused of claiming $1,000 on a monthly basis without backup receipts. Even if he was not obliged to under the law, people still were looking for an insight into public spending defined by law, and Hood stood behind them, claiming that all expenses should be documented and made available to the public as requested under the 2008 Freedom of Information Act.

Hood landed a great public career which is proved by his election and re-election throughout the years, and he contributed significantly to the image of the Labor Party.